This is the story of a young hero named Ilid Songhero. The human was from Golegorhax AKA Slipsharks, a prominent coastal city south east of Athira Etha. The city was part of the Mellow Realms, the human civilisation considered to be the strongest force of the known world. The peaceful Empire was starting to experience change after hundreds of years of dominance. The world was rapidly shifting in Athira Etha. and the balance of power was tilting in unfavorable directions for the humans. 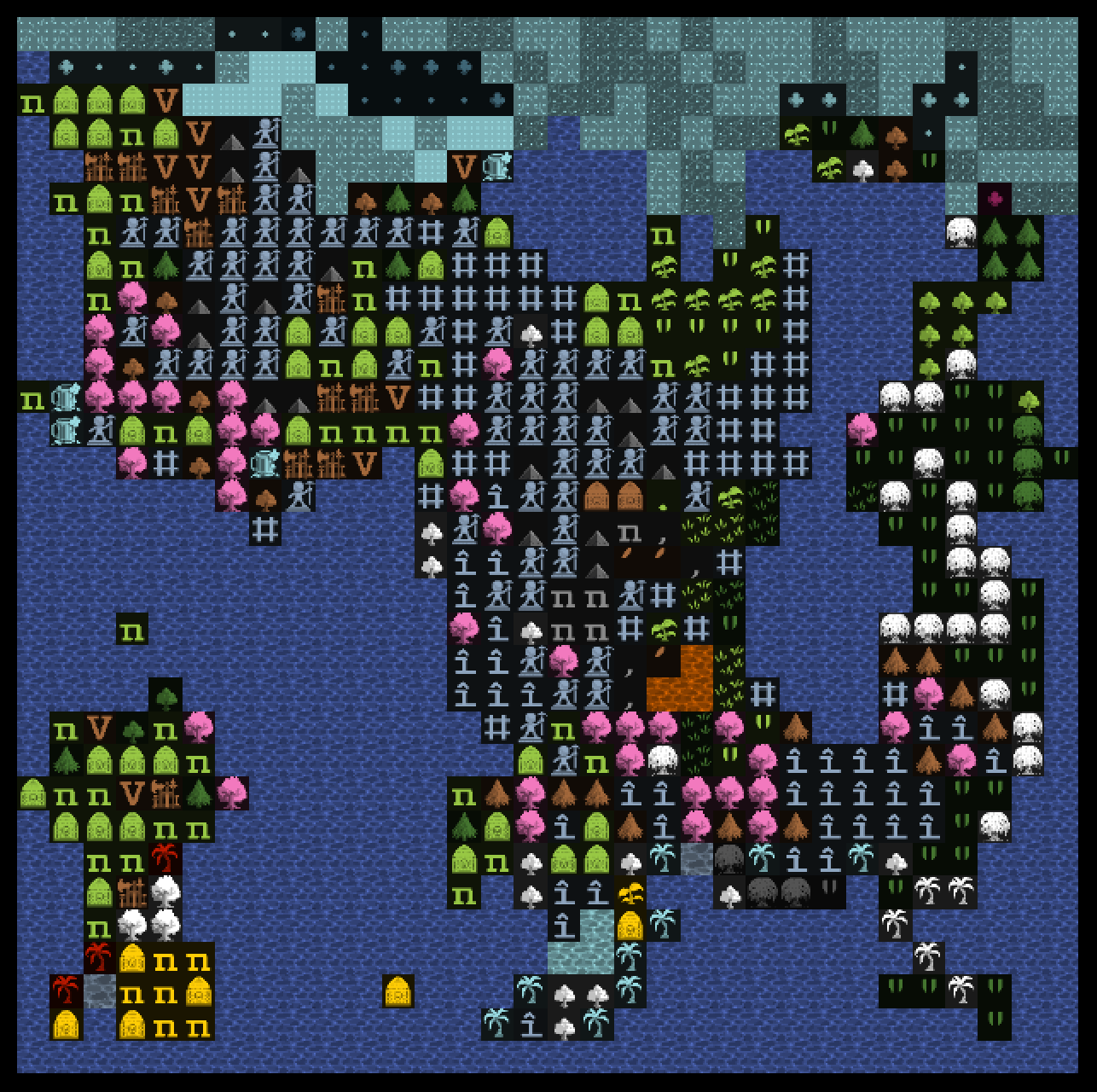 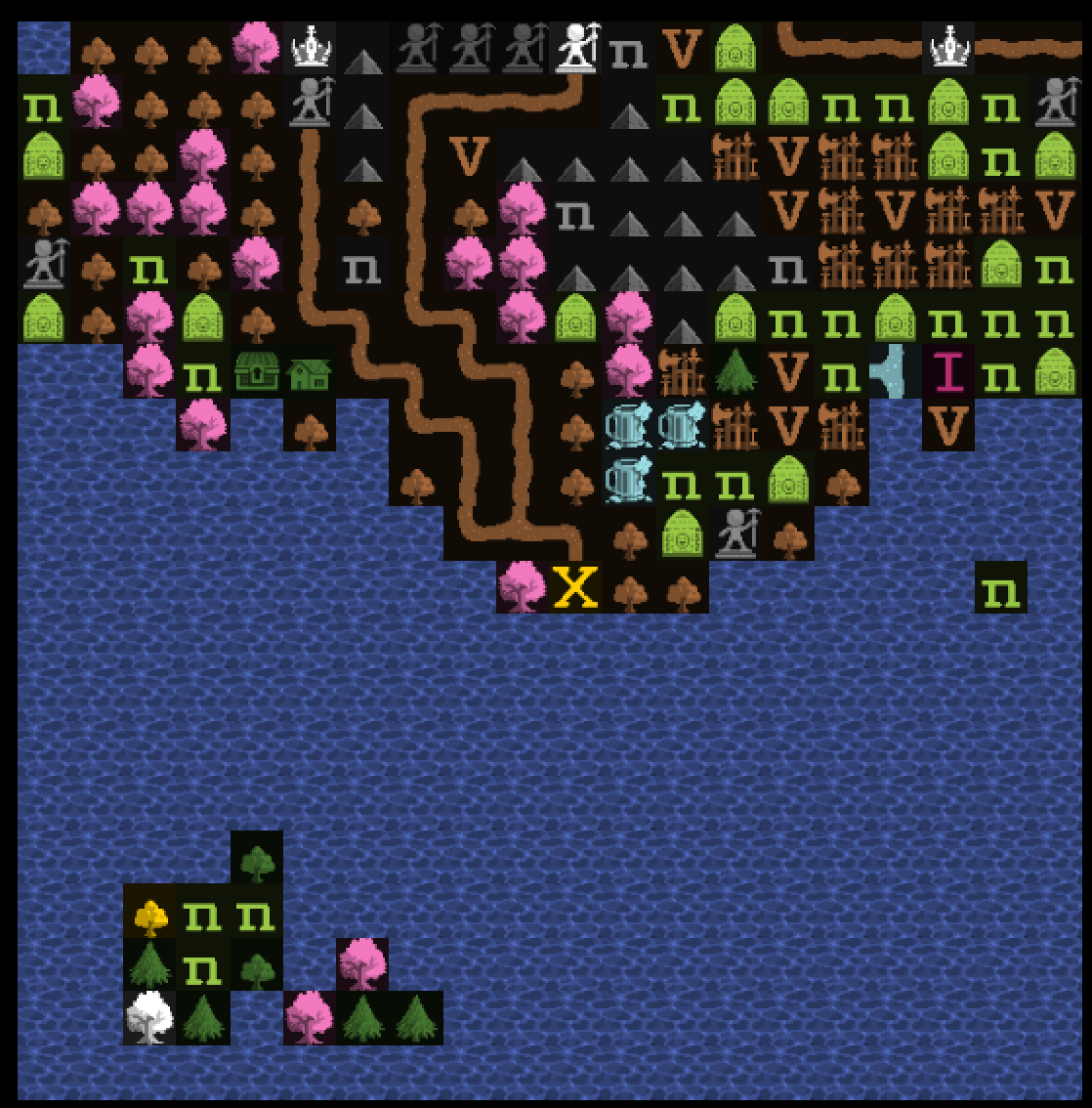 Ilid wasn’t special among his people, besides his muscular build. Like everyone in the city, he was tall, with dark peach skin and extremely long light brown hair. He had a very tall face and head and a broad chin. His eyebrows were especially memorable due to their longness - even though he trimmed them often in a futile attempt at keeping them under control. 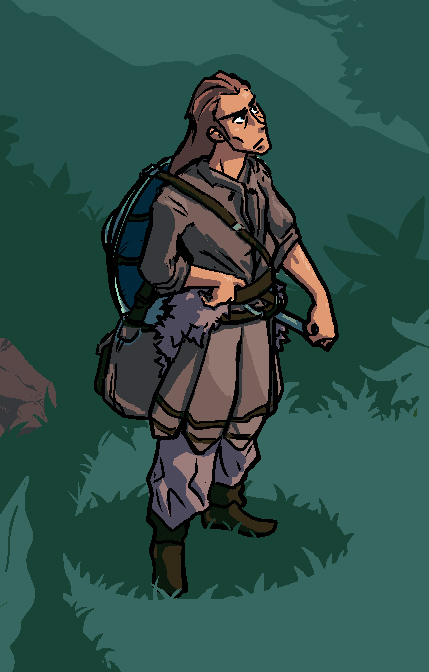 After a lifetime of training and discipline on the beaches of Slipsharks, Ilid had finally been given the chance to become a hearthperson, under orders to serve his lord Ast Questedfence. He had not been able to fulfill his duty reliably as his heart did not find honor in servitude.

Ilid dreamed of one day leaving his city, being free, and traveling. He wished to explore the far reaches, where nobody ever gone before. He wanted to bear witness to the most remote and mysterious corners of the continent. The dream of exploration kept him hopeful and lively doing his assigned tasks, with his head up, until the time came when he earned his chance. 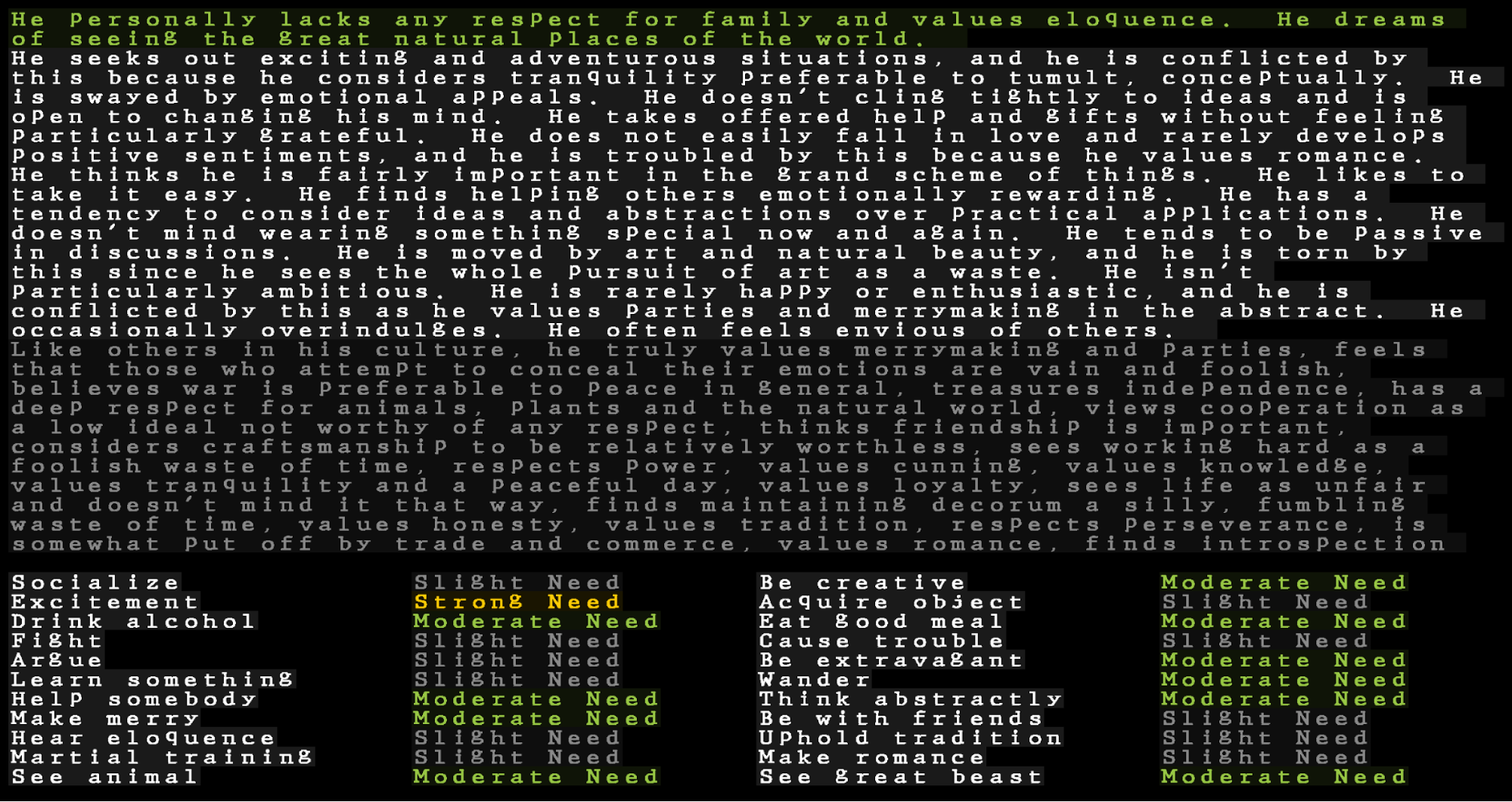 Ilid looked forward to the day when the adventure of his life began, and that day came much earlier than he imagined it would. On the 22nd of Felsite in the middle of summer of 257 Ilid finally began his journey. But it would not be under normal circumstances (as is usually the case in every good legend).

The door closed with a thud. Ilid and everyone present turned their attention to the screaming, alarmed. 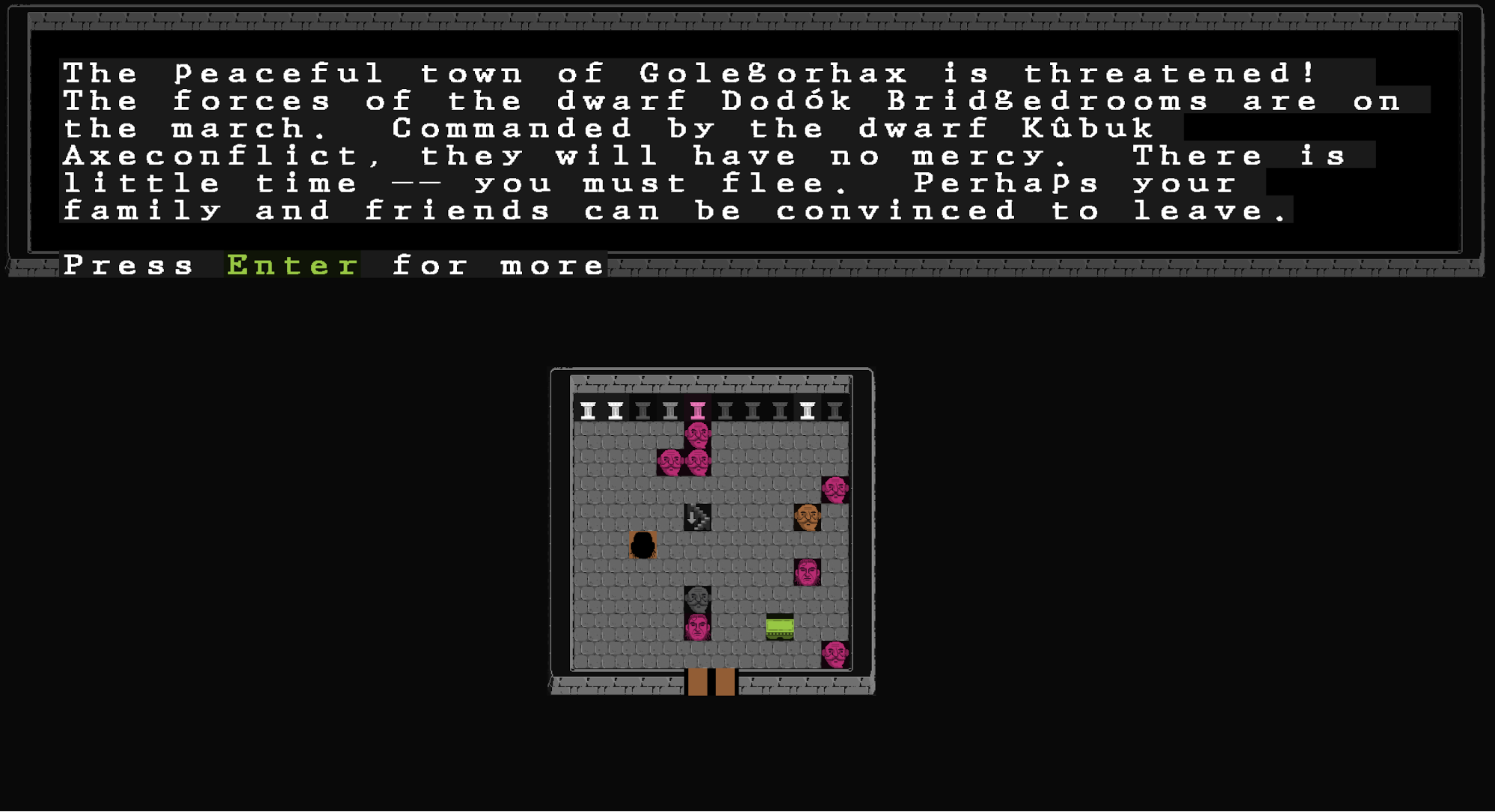 News of a possible assault ran from mouth to mouth for several weeks. The armies of The Flickering Hammer, commanded by its queen Dodók - more popularly known among the people of The Melow Realms as Dodók the Avaricious - had marched incessantly for months and conquered several villages to the north. There were whispers of dwarves wearing cobalt-colored armor, with an almost unnatural intense glow, indestructible and light, and wielding axes with unimaginably sharp edges cutting through the soldier’s breastplates like hot iron cuts goat butter. Frightened humans from the coast of the Forest of Coven were leaving entire villages abandoned and refugess were suddenly everywhere.

Panic spread rapidly in the fortress of Slipsharks’s exhibition hall. Ilid, in midst of the uproar, took a moment to reflect.

“Is it possible? How dare Dodók dare such a risky invasion? The Bastion of Diamond has never lost since its founding in the year 80”, he thought. However, it was not impossible. Provisions were scarce. Many of the Empire’s soldiers had been transferred to the capital and the fronts, perhaps to protect areas of greater importance or for reasons unknown to a newly appointed hearthperson. “Would Dodók receive insider information about Slipshark? Will there be a mole among ours?”

Something was certain. If the rumors were true, under these circumstances it would be best to evacuate. All should flee to a safer area before the Flickering Hammer’s army besieged the fortress.

However, were that to happen, hunger and thirst would end its citizens slowly and painfully as surely as the axes of the dwarfs.

Ilid consulted his Lord, Ast, whom he guarded in the exhibition hall.

—My Lord, do you know anything about the army on the march? —

The dwarf Ast, nestled in his luxurious leathers and fabrics, trembled like a darven cheese while adjusting his puma man fur crown.

—The army of Dodók’s is marching here, that insatiable dwarf! It was inevitable!—

At the alarm, the soldiers gathered their armor and weapons in a hurry, some in disbelief, others visibly shaken.

People ran up and down the stairs in all directions, instilled with fear.

He addressed the noble again, this time in a firm voice.

“My Lord, come with me and I will bring thee to safety!” assured Ilid.

— Where should I take thee My Lord?

Stuttering, Ast replied — Oh, sure, sure. My eldest daughter, Ustuth, lives in Visespeak. Take me with her, I’ll be safe there.

Suddenly, Ilid felt a burst of excitement running through his body, as he realized that this would be his first trip beyond the Coven Forest, his first trip to unknown lands!

He then asked Lord Ast about their new destination, with a smile on his face, which went unnoticed by Ast who focusing his attention on his own belongings.

—Can thee tell me the way to Visespeak? —

—Of course, I travel there often! Visespeak is far to the east. — Ast showed him a detailed description of the road.

—And if that damn greedy rock eater follows us to Visespeak, I wish she be fed to beasts, just as Inefa did to the dwarf with the same name in 162— concluded Ast.

Several people heard the conversation, their faces showing obvious interest. It’s important to note Slipshark had citizens of the main three civilized races. Occasionally goblin performers would visit, but it was unusual to see them far from their dark pits. 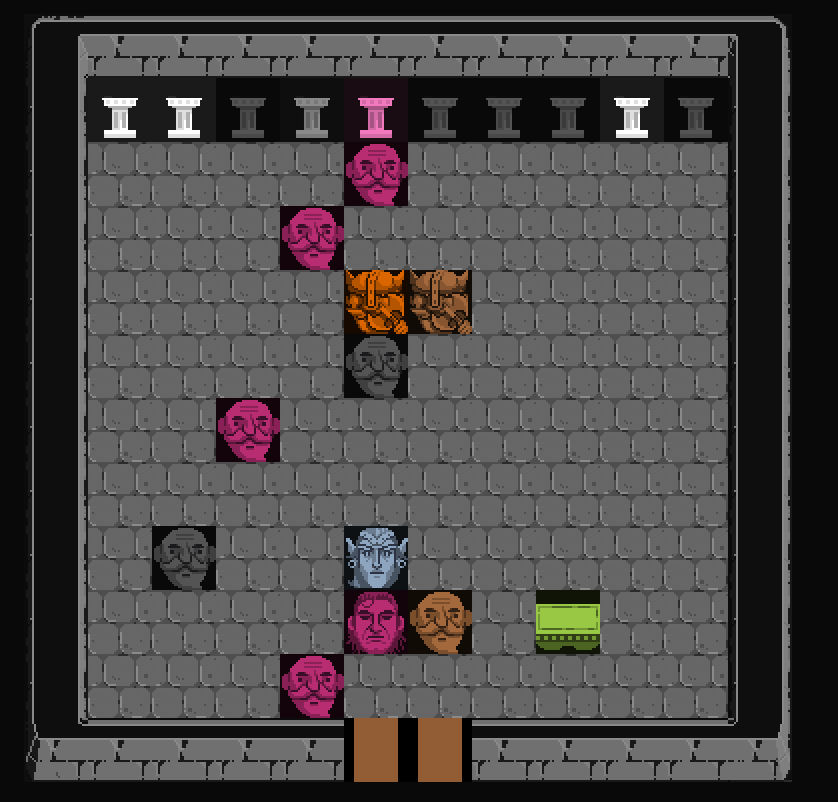 From the expressions in their eyes Ilid could guess the thoughts crossing their restless minds. In an instant of clarity, he understood that there was no real leader of all of the civilians in the fortress, so he took a deep breath, inflated his lungs and spoke loudly to the whole room.

When he got their attention, one by one, offered to guide them to a safer place.

—If you come with me I can bring you all to safety!— 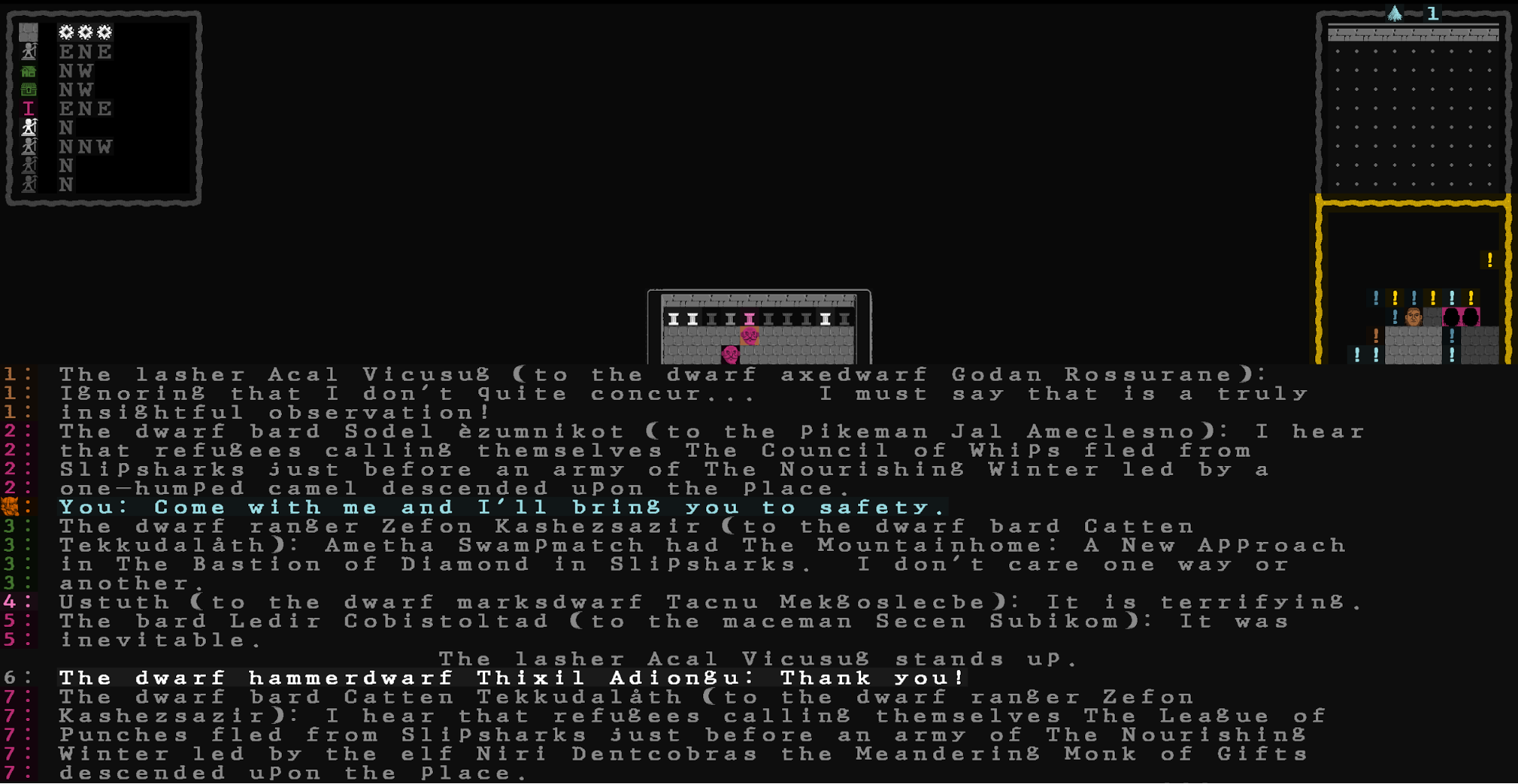 Many seemed more interested in fleeing on their own, but others thanked him for the offer and joined the company without hesitation. The group grew quickly, soon reaching fast twelve members. 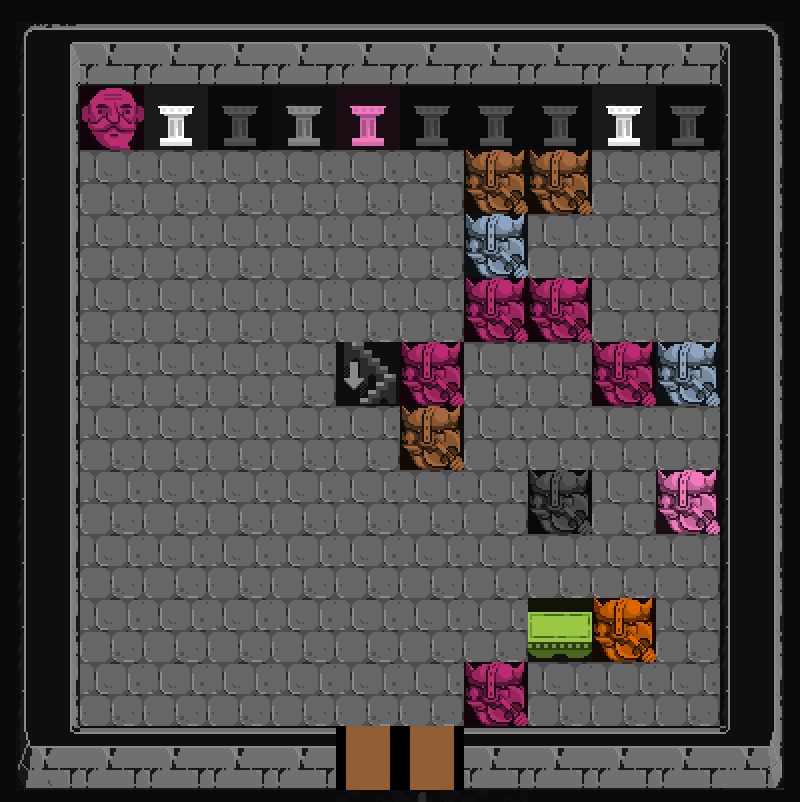 A dwarf waited in a corner of the room, somewhat distraught. Ilid approached her and offered his help the same as with the rest, followed by all members of his new group.

— In my home, I am known as “Ustuth The Romantic” — Ustuth introduced herself,

— I’m a bard of profession, guided by my god Vesh and his visions of nightmares.—

—So, you are not from here Ustuth— pointed out Ilid, intrigued by the dwarf

—Where is your family from? —

Ustuth, after a long pause, answered.

—I’m head of the family ever since I crated The Road of Stocking in Mooncanyon, five years ago … —

Everyone whispered among themselves in surprise.

It was known that Mooncanyon was the new capital of The Flickering Hammer, and the source of all these whispered stories. It was a fortress which, according to rumors, was under the watchful eye of the dark lord in his tower of Shellsblocks, the fallen king of The Mellow Realms, the infamous and cursed Emung, as well as his entourage of death. Nothing good could come out of his interest in that fortress.

—Where should I take you? Do you want to return to Mooncanyon? — Ilid asked to break the awkward silence.

“I no longer have any family to speak about,” lamented Ustuth, perhaps recalling better times.

Ilid wondered about the reasons that forced Ustuth to leave her fortress, but those questions had to be postponed.

With no time to lose, Ilid guided the group in search of provisions.

Other soldiers did the same thing as Ilid, going through the halls in the chaos of the corridors, searching through the scattered objects for anything of value before leaving the place for good.

Ilid approached one of those soldiers to ask for his help.

Secen was a human mercenary, versed with the mace, Ilid knew her. He had several conversations with her in the years they shared as soldiers protecting Slipsharks.

—Secen, come with me! Join me in my adventures! We are headed away from here. We have to take the civilians to safety.—

“With such a large group,” Secen interrupted, “what part of the glory would I have left?”

Secen, like any good mercenary, worked differently from Ilid. She did not seek to help others in exchange for beautiful words of appreciation.

Ilid tried to appeal to his loyalty, eloquent as usual.

After a while, she ended up giving in to his pressure.

Although Ilid understood that given the circumstances he should not put all his trust in her, every extra weapon counts when the moment of truth arrives, and the more soldiers who joined the group, the more successful the trip was likely going to be.

With Secen in tow, the scavenging continued.

Ilid found many abandoned pieces of armor in the military supply rooms. His lord Ast didn’t seem against taking them for the cause, so Ilid was free to make his own decisions. And so he did.

In addition to a copper breastplate, Ilid doned a copper mail shirt, high boots, gloves, and armed himself with a bow and iron arrows. He also took some cut gems for moments of need, which could always be used in exchange for other things due to their high value and light weight.

This continued for a while. Along the way they offered their help to every individual who crossed their path. The sound of their march rumbled through the halls of Slipsharks, their echoes reverberating in the distance. Many more joined Ilid’s band, though some preffered to stay out and make their own way.

Upon gaining the surface once again, in one of the keep’s rooms located in the courtyard, Ilid counted the faces around him. 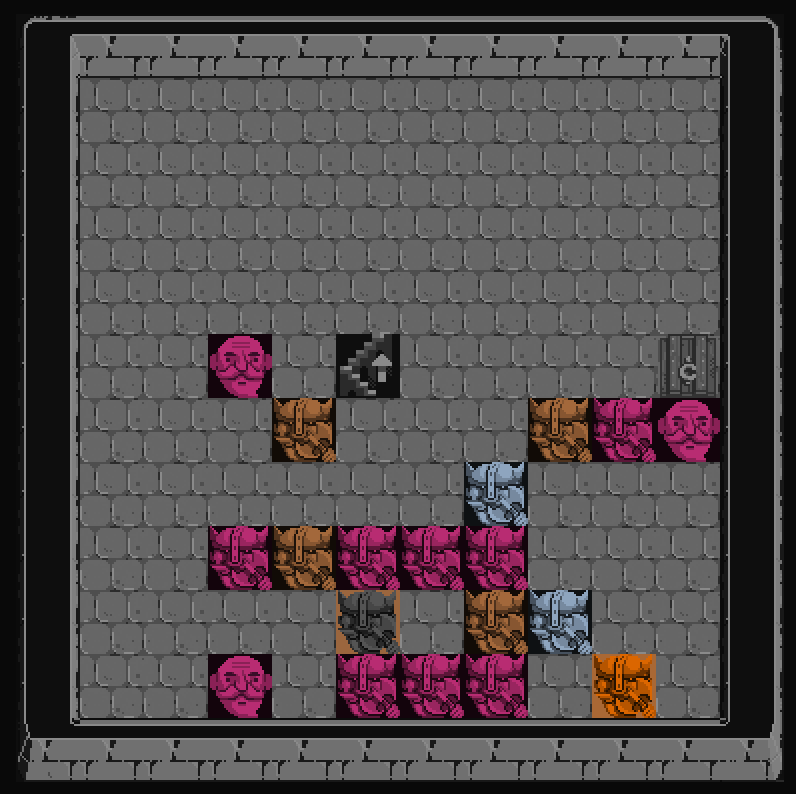 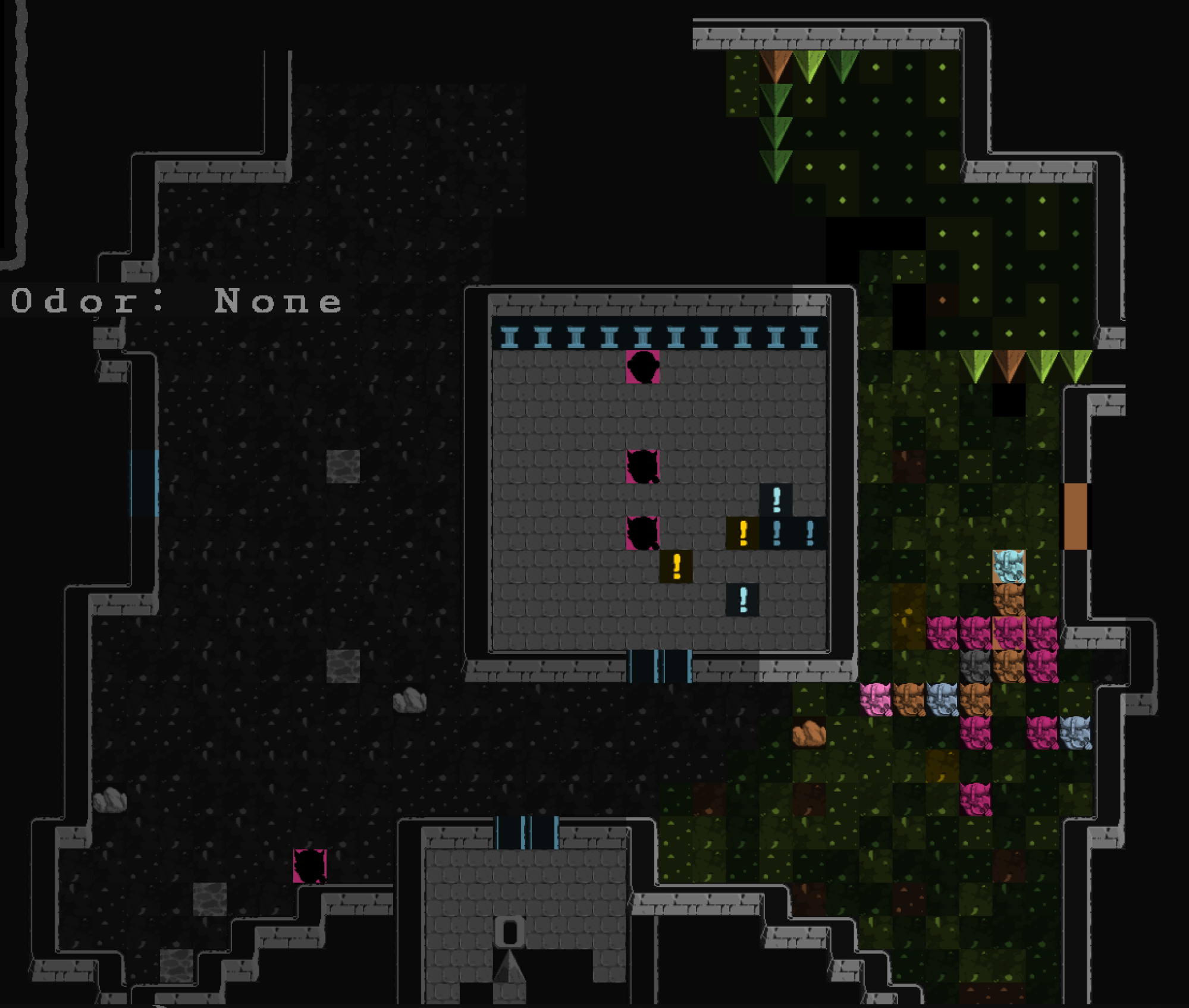 Twenty in all, six of them armed, including some mercenaries and guards. A doctor, some peasants, bards, and farmers. The burden of responsibility increased with each new member, but now the group had been forged and there was no turning back. Ilid would finish what he had started.

—Very well— he announced to everyone — My name is Ilid. Many of you already know me. To those who don’t, I thank you for your trust under these circumstances. My plan is as follows. — Ilid cleared his throat and continued.

—I’m heading towards Visespeak, east of the continent, but according to my calculations, we have to pass close to the capital, Gigolduslud on our way there. Everyone who has doubts now is the time to make a final decision. Those who trust in my judgement, follow me! — Ilid concluded, firm and sure. 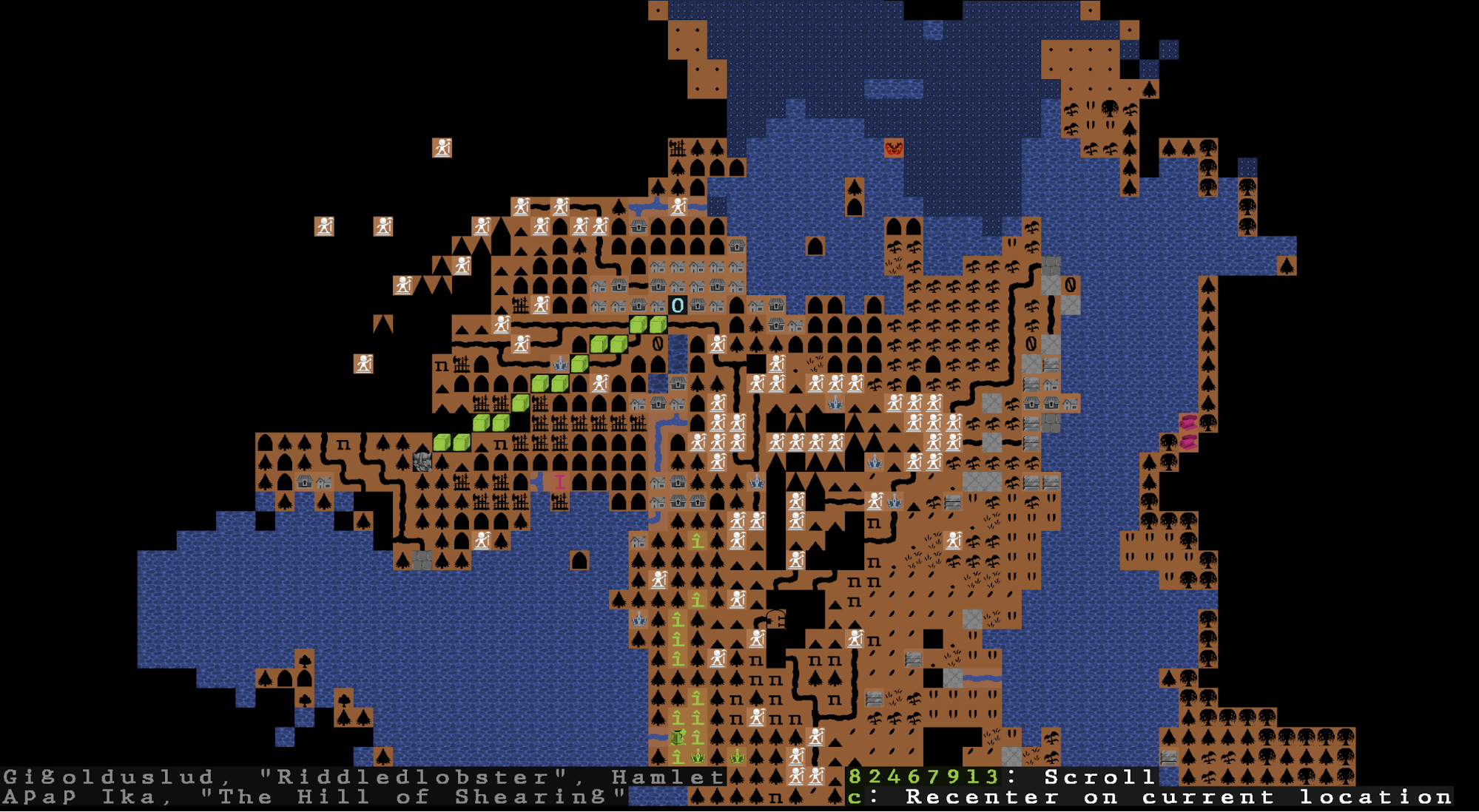 After a moment of silence, Ilid sheathed his hammer and shield and finally began the march. The rest followed him, speaking quietly amongst themselves. 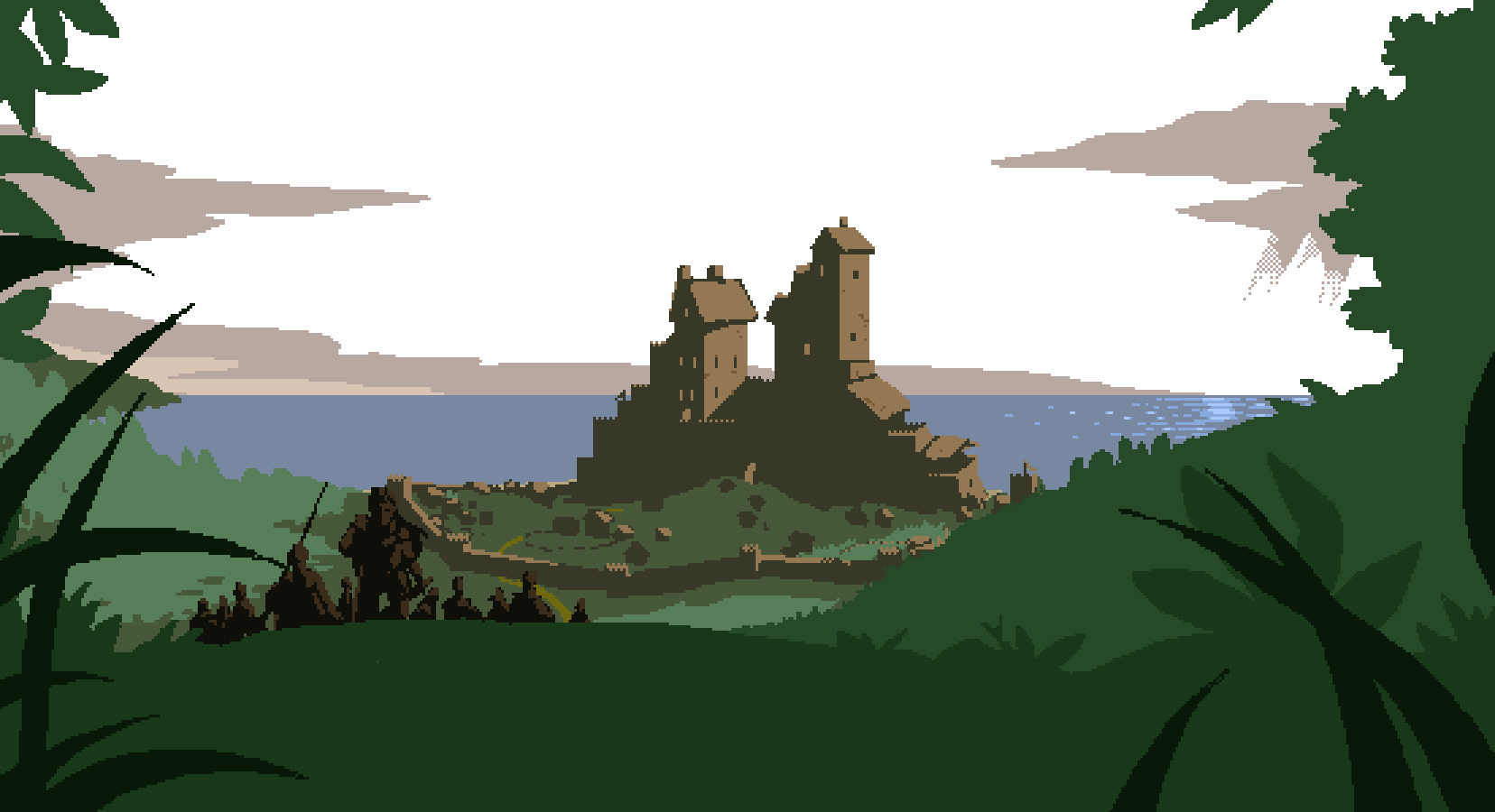 The threat of war. An excuse to travel far. The emotion of the first trip that endowed our hero with courage. The group of twenty relied on and believed in his abilities, for the moment. Perhaps after seeing the fire shining bright in his eyes. And yet, did Ilid trust himself? Would he be able to guide a company of that size safely to the capital? What events and dangers awaited them out there? Those were all questions that will soon be answered.

Written by Toen.
Special thanks to "Jo" from discord for the proper translation to English.